This is first most thing when someone starts the career ideally looks into other than monetary benefits rather more into what’s the job description we fit into. Most of the people till half of their job or career do not know what’s their actual motive of living . Is it survival from bureaucracy or running life to meet out material expectations. Unlike Western world where Job Description is very clear , sub continent people adhere themselves around secure place in the company of their leader. It’s well said Excellence doest not need someone to safeguard it’s moves and makes it’s own path.

With growing years of my experiences I analysed your ideas are not valued unless your leader let’s your voice to reach in right direction but now after considerable experience I felt that pursuit of career journey is understood very late.

In past several years I have seen many bosses or leaders but the one which stands out from league has taught me that it’s work which gives you happiness not the designation you hold. It’s well written in hindu scriptures the position you are holding today is not going to last longer so why the fuss around being attached to it so that it creates a distance between employer and employee. Why someone has to bow you for the reasons other than your work.

Nothing goes to change when I see Indian Incs and leaders sitting on top being felt insecure and constantly needed information from staff about what’s least important in growth of organization or people work with  you.

Organization charts are sometimes explained incorrectly. It’s responsibility as per the capability not as per virtue of someone’s favor.

I often feel what if any organization where you have flat profile structure and everyone is treated equally will that organization will grow or fall.

Half of the organization are busy in doing meetings rather than actual work. Planning is important but most important is action. We often delude ourselves from action being involved in flattery.

We say work is worship but hardly seen any indian corporate to denounce the culture of High Command. And this is why Ego is attached more closer to the position one holds. If one really loves the work whats being given positions will never being path of obstruction because the one which matters the most will become paramount.

It’s not the bureaucracy we see in government sectors but one can take any sector it’s the same. And people who work for enjoyment and Excellence they are always being fetched out on their own , companies look for them rather they look for the companies. It’s the living standard we create with our positions which makes us uncomfortable to reach out as a common man.

All the fights,  autocracy in this world is for wealth and power which can turn away any given day despite knowing that person is so much attached to it this makes growth of the person as well as nation to move up or down. 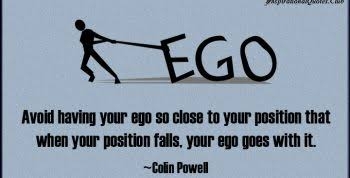